The lawsuits were brought because of WWE’s Continuing Refusal into 2018 to Admit Wrestlers are at Risk for CTE. The WWE Denies and Now the Court Dismissed the claims. The WWE’s lawyer even called for Mr. Kyros to be Disbarred. Decide for yourself, read on.

Jimmy Superfly Snuka, the world learned in November 2017 was diagnosed with Chronic Traumatic Encephalopathy (CTE) as part of his Estates legal claims against the WWE for failing to protect, treat and help him and other wrestlers suffering from the disease. The donation and CTE study were coordinated by Konstantine Kyros after Jimmy died during the pendency of his lawsuit seeking to get help from the WWE.

The effect of the CTE diagnosis (and that of several others such as Rex King and Mr. Fuji) was not what one would have expected. Instead of the WWE realizing that there was just maybe something to all these wrestlers suing them for help, they simply ignored it. It was as if the diagnosis didn’t happen at all. There were no calls for increased research into wrestlers brain tissue, no donation drives, no calls for outreach to wrestlers with CTE symptoms, no alteration in tone and frequency of the legal attacks on the lawyers bringing the claims for the CTE-riddled wrestlers. It was as if the world’s most famous athlete diagnosed with CTE, Jimmy Superfly Snuka didn’t exist.

Ironically in the months before his death, the state of his brain was of intense interest for more media driven rather than public health reasons.

The debate over Mr. Snuka’s brain in his murder hearings, mirrors that of two competing views of reality in the WWE lawsuits:

A) The position of the Plaintiffs and their lawyers:
CTE is a known occupational disease that is a risk of wrestling which has resulted in a health crisis that requires immediate urgent WWE action in terms of study, medical treatment and compensation.

B) Or what is essentially WWE’s position:
Wrestling a relatively safe activity with an unquantified CTE risk. Wrestling has among its goals not to injure anyone and at present it is not worth a WWE funded, dedicated study of wrestlers brains for CTE. No WWE outreach, warnings, medical treatment are required for former wrestlers.

Shortly before Jimmy’s, death, an expert, a certain John O’Brien testifying to support the prosecutions case to put Superfly on trial for a 1986 murder made the following observations before the presiding Judge: Mr. O’Brien, who examined Snuka in February (2016) and reviewed doctors’ reports on the wrestler, said there is no documented evidence that Snuka sustained even one concussion during his 40-year career in the ring.

The psychiatrist said the assertion that Snuka had suffered numerous concussions during his career came from the wrestler and his wife, not any doctor. O’Brien said he didn’t believe Snuka was ever at risk for serious head injury, despite his high-flying acrobatics in the ring. “It’s theater wrestling. It’s like stage fighting,” O’Brien said. “It’s not the same kind of injury you’d expect to see with heavyweight boxing or professional football.”

(Evocative of Triple H’s 2013 Statements at WWE ‘Donate’ $1.2 Million Dollars to the Nowinski NOT TO STUDY WRESTLERS BRAINS Press Conference? Levesque said pro wrestling is fundamentally different from football when it comes to hard impacts. “If you’re in the NFL, your goal is to try to hit the other guy as hard as possible. … The goal in what we do is the exact opposite,” said Levesque.)

LEGAL THEORY of WWE’s LIABILITY:
Yesterday the court ruled against the Snuka family despite his confirmed CTE, Alzheimer’s diagnosis and his long-term ongoing relationship with WWE as one of their greatest stars.

The tragic Court ruling reads in part: “The affidavit does not support that Mr. Snuka suffered any head injuries or risked incurring such injuries later than 1996. … And Mr. Snuka has not alleged that any of his alleged injuries were incurred during WWE appearances post-dating 1996…. wrongful death actions are barred… survival actions are barred because the statutes of limitation or repose for each deceased Plaintiff’s other claims have elapsed.”

The court seems to have ruled essentially that in order to bring a claim for CTE- the underlying head injuries that cause CTE would have needed to occur within five years of the date he died. As will be easily demonstrated below this makes no sense.  The problem with this analysis in our view is that it ignores what CTE is:

1) A latent progressive degenerative disease found in athletes with a history of head injuries.
2) CTE is not linked to a single identified blow to the head, but rather from the accumulation of repeated sub-concussive blows.
3) Symptoms of CTE may not occur for many years after the blows to the head occurred.

So in essence the Snuka CTE claim could be said to arise from his exposure to head injuries in WWE, and so a Jury would need to decide what event or events would determine what started the clock ticking on whether his estate could bring a claim under the deadlines imposed by Connecticut Law. The Judge seems to have adopted, on what factual or medical basis is unknown as she does not say directly, an injury-in-fact type event which began this hypothetical clock ticking.

Under the science of CTE progression, the Judge’s ruling would seem to foreclose most legal claims for neurological occupational disease type injuries. For example Asbestos or chemical exposure claims for example could be barred if a worker was exposed 20 years before he or she developed mesothelioma cancer or a rare leukemia. The majority of courts looking at these problems have decided to allow experts and Juries to make this determination absent some clear case law. Connecticut appears to impose a fact type analysis on what constitutes the appropriate date to start the clock. When Snuka retired from wrestling and began to experience symptoms, say 10 years after retirement, perhaps the WWE could argue that that was the appropriate date for the clock to start. Plaintiffs contended that Tau protein being released are continuous present physical injuries that could be used to decide a trigger date. In any event these facts, we argue are medical-legal questions prematurely decided.

Seemingly some ‘experts’ were fighting out in the year before Mr. Snuka died whether he had anything wrong with his brain (as above), but below is the proof —as had been alleged in the tossed lawsuit that he had neurological diseases including CTE. As such this would seem to be a possible trigger date for the statute to start running- and not as the Judge ruled the year 1996. In any event the the claim is not frivolous and by way of example: NFL players who were diagnosed with CTE in the NFL lawsuit that sustained accumulated head injuries many years before (decades in some cases) they were diagnosed with CTE were eligible for awards of upto $4,000,000 dollars.

Conclusion: The Court and WWE don’t GET it. 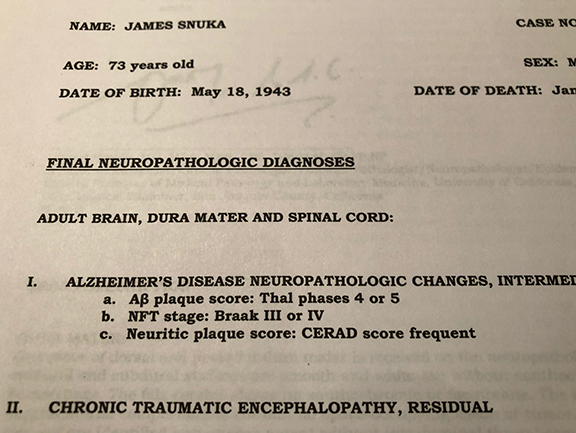