We are working on developing a bibliography of publications about wrestling, the WWE and CTE, with a view to understanding how the working conditions for wrestlers evolved.

In memory of the older boys whose broken bodies and shattered lives should have taught us something… and as a challenge to the new boys who haven;t yet had enough pain or abuse or time to figure it out. And to get our most important act organized.”

This was a very informative and inspiration book for anyone interested in the health and labor issues in pro wrestling. For example the books gives a very good overview of the legacy kayfabe and how it impacts the ability of wrestlers to assert rights and how a code of silence and control still exerts itself over pro wrestlers. As I read it I found myself taking notes and comparing the descriptions of events in the of past with the current state of affairs- unsurprisingly since its publication not much as changed. The WWE lawsuit is an attempt to answer these long standing issues and call the “corporate outlaw” to account. 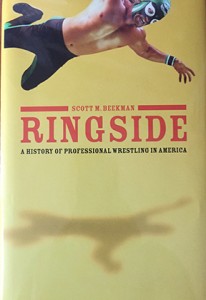 “For those who control wrestling, history becomes nothing more than another marketing tool, twisted and distorted at will.” An highly readable academic history of wrestling that gives a serviceable outline of the origin of the current working conditions of modern professional wrestling. The books give a good overview of modern wrestlings emergence out of traveling carnivals, and the steady accumulation of power in the hands of promoters. There is a useful discussion of the wrestling code of slience and development of an in-group language, Kayfabe that has shaped the mindset and dialogue among wrestlers to the present.