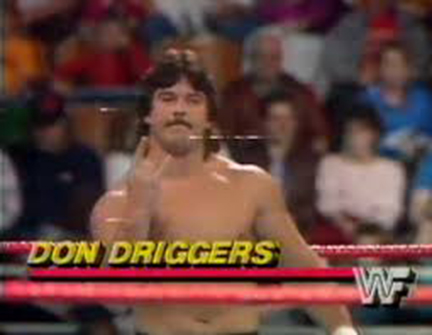 Donald Driggers, a former mid 1980s “enhancement” wrestler who is currently a plaintiff in the pending WWE Laurinaitis Lawsuit recently was awarded disability.  At age 55, it has been determined that Mr. Driggers injuries and health no longer enable him to work. With the help of Kyros Law and his lawyers at Disability Justice LLC ( A Social Security Disability firm in PA), Don has been able to get at least some help to pay bills and get by. According to the pending federal lawsuit by 60 wrestlers, WWE has forgotten its former performers and does nothing to help them despite many long term occupational injuries related to their wrestler careers.

Instead of using a tiny fraction of the hundreds of millions of dollars in annual revenue and profits from the collective effort of the wrestlers who helped build WWE and whose past performances are a large source of ongoing revenue on the WWE network, the company has stated in court documents that it believes the claims in these cases are “frivolous” and resorts to accusing the attorneys, (including Don’s lawyer Konstantine Kyros) representing the wrestlers of “dishonesty” and “wrongdoing,” by filing their claims.

Donald: “I want to thank Mr. Kyros for helping me out, standing up for me, when no one else could or would. I was going through what one might call a mighty rough situation and he came through for me by getting in touch with these folks who got me disability on my first go round. Thank you for thinking of me, I feel that the world had got up and had just about forgotten me.”