On September 29, 2017, Judge Vanessa Bryant ordered the plaintiff wrestlers to refile the WWE lawsuit. In doing so, she rendered moot and denied all the earlier attempts by WWE to dismiss the case (subject to the plaintiffs’ next filing). The result is that the wrestler-plaintiffs have another opportunity to make their case and refine their arguments about the WWE’s responsibilities before the court. Significantly, Judge Bryant also asked for private statements to be submitted directly to the court from every plaintiff involved in the lawsuit.

The WWE wrestlers not only don’t get workers’ compensation, they get no insurance or long-term care at all from WWE. If they get CTE or a neuro-cognitive disorder they get: absolutely nothing. The article also ruefully observed that unlike professional athletes, injured Cirque stars don’t even get to keep their salaries.

The article invites other interesting and startling contrasts to WWE which does not record or report its injury rates to OSHA or anyone else. Does anyone think that WWE wrestlers have lower rates of injury than Cirque du Soleil performers?

WSJ:
But Cirque stands out for the number of injuries to its performers, many of which become workers’ compensation claims. A Wall Street Journal analysis showed that in 2011, the most recent year for which data is available, Cirque’s Kà show in Las Vegas had a higher rate of injury than all but 78 workplaces on a list of nearly 52,000 of the most dangerous compiled by the U.S. Occupational Safety and Health Administration.

Most top professional sports teams, including Major League Baseball, which are among the only workplaces (wait what about WWE?) to come close to Cirque in likelihood of injuries, give workers their full salary until their multiyear contracts expire. In the National Football League, injured players receive only a portion of their salary for a few years if they can’t play, but they generally receive large upfront bonus payments to make up for the risk, according to sports agents and lawyers.

Ms. Muller criticized Cirque for not providing more generous financial settlements. “These are not flukes, these are accidents,” she said. “You can’t send people home broken and broke.”

Does anyone know any broken and broke former WWE wrestlers?

Wrestlers renewed their request for the court to take Judicial Notice of Largest CTE study to date- financed in part by WWE. Click here or below on Text for Full Document 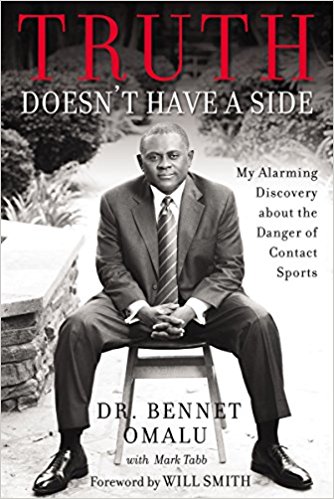 In  writing my paper, my co-authors and I transitioned from “football players” to “athletes,” because those who participate in all contact sports- most especially high-impact, high contact sports are at risk of brain trauma and therefore CTE. This includes those who play football, ice hockey, wrestling….. 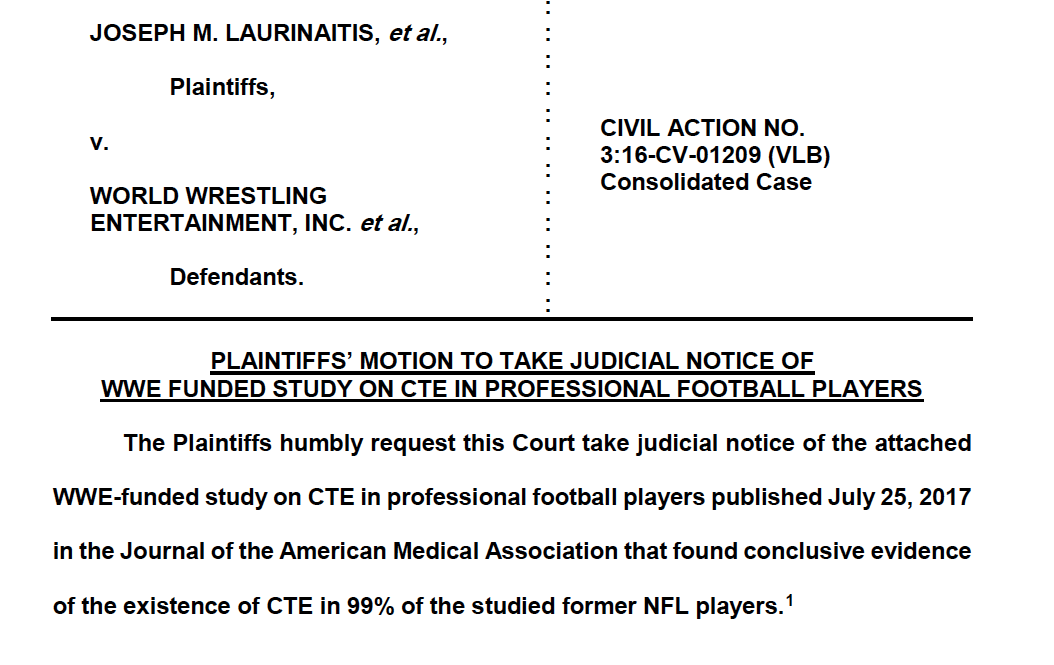 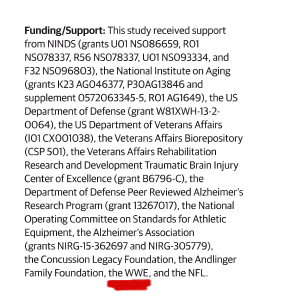 The WWE’s Cover-up and silence on CTE continues through its financing of the largest study to date of CTE in NFL players. This post is the only outlet to identify this issue: On July 25, 2017 a study funded in part by the WWE reported that Chronic traumatic encephalopathy (CTE) was found in 99% of deceased NFL players’ brains that were donated to scientific research. The study was published in the Journal of the American Medical Association- one of the premier medical journals in the world and received heavy press world-wide. Not reported was the WWE’s role in funding the study and its continued failure to finance or promote any study of CTE in wrestlers.

The WWE/NFL financed study confirms that:
1) Repeated head trauma that causes CTE  will equally impact wrestlers- unless the laws of physics are different in WWE and wrestling matches.
2) CTE is no longer “junk science” but has entered the realm of near certainty.
3) The WWE knows or should know that wrestlers are at risk for CTE. The study is decisive evidence of WWE’s awareness of CTE.
4) One month after the study was published the WWE refused to even discuss ways to help wrestlers, refused to finance CTE research in wrestlers, refused an NFL style program to treat wrestlers.

The publication of this groundbreaking study raises troubling questions about the integrity of scientific research and the medical and legal establishments total indifference to WWE wrestlers. Where is the call to study wrestlers brains or get help for wrestlers?

The study included the brains of deceased players of American football from an active brain donation program, CTE was diagnosed in 110 of 111 former National Football League players (99%).

In contrast all current CTE donations & studies of WWE wrestlers by Dr. Bennett Omalu are being helped by a lawyer in Hingham, Massachusetts. The WWE and Boston University failure to study CTE in this group represent the institutional indifference to wrestlers who have no power or voice. 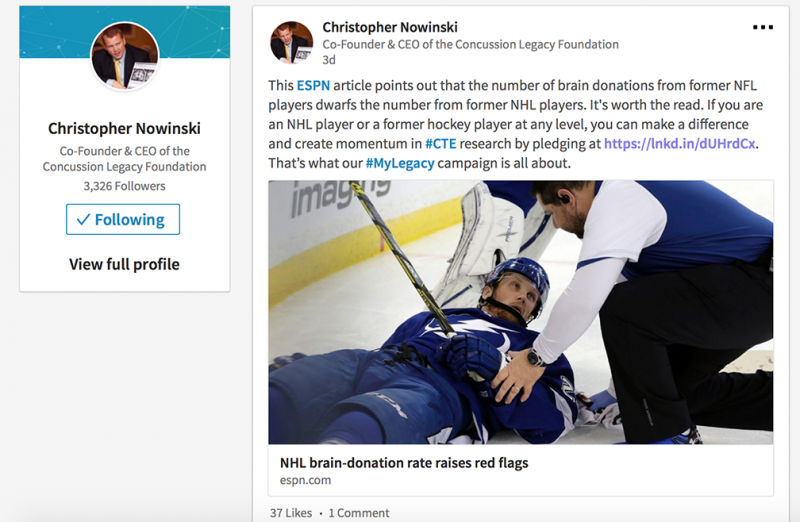 A wrestling fan emailed me this item about the controversial Chris Nowinski- the founder of the Concussion Legacy Foundation that has gotten millions of dollars from WWE and has Triple H on its Board of Directors.

Last year Mr. Nowinski, a former WWE wrestler was the subject of a Boston Globe Expose on the Foundation’s failure to do any studies of WWE wrestlers and its apparent inaction on recruiting WWE wrestlers brains for CTE studies- per the June 2016 article Mr. Nowinski implausibly told the Boston Globe that he did not acquire WWE wrestlers brains because “Many people who meet our brain donation criteria die each year, and I would estimate we do not pursue over 99% of cases.” Mr. Nowinski also told the globe that he had scaled back actively pursuing brains of people who have died. Yet here he is in August 2017 actively recruiting brains for NHL players (with WWE money?) and linking to an ESPN article about how the failure of NHL players to donate raises “red flags.”

The key component of CTE research is getting athletes to donate their brains, without Brain donations there is no research. Mr. Nowinski, Boston University (this author graduated from BU law) and the WWE appear to be working towards a goal that ignores studies of CTE wrestlers. Does millions of dollars from the WWE and Mr. Levesque’s board seat influence this research?

When former “troubled” NFL player Junior Seau died on May 2, 2012 there was massive media speculation that he may have had CTE. Indeed this diagnosis was later confirmed after numerous entities attempted to acquire Mr. Seau’s brain for CTE study. According to the book: League of Denial (Mark Fainaru-Wada, Steve Fainaru): “Minutes after Seau’s body was carried out of the house, his oldest son Tyler began getting calls seeking his father’s brain.” (p.7)

Indeed the episode occupies an entire chapter of the League of Denial book entitled “buzzards.” The authors report that “at least half a dozen prominent researchers were making a play for Seaus’ brain.” These included a research doctor who won the Nobel Prize. The day of Seau’s death (at 5:55am) the Nowinski-headed BU group apparently enlisted a famous Sports Illustrated writer who tweeted to over 1 million followers: “Dedicated researchers in Boston studying deceased players’ brains for evidence of trauma attempting to obtain Junior Seau’s. Hope they do.” (p.332)

However contrast this brain recruitment activity when a year earlier on April 3, 2012 Chief Jay Strongbow died. Nothing. No recruitment, no mention of CTE.
Maybe that was because he was out of the limelight, but then:
June 28, 2013 WWE wrestler Matthew Osborne dies. No CTE Study.
February 18, 2014 Nelson Frazier dies  No CTE study.
April 2, 2014 Ultimate Warrior. No CTE study.
June 10, 2015 Dusty Rhodes No CTE study.
July 30, 2015 Roddy Piper. No CTE study.

No CTE Studies, donation drives or activity by BU, Nowinski, Nobel prize winners, NIH or anyone else for wrestlers. Mr. Seau is famous to be sure, but is he more famous than the Ultimate Warrior? Or Roddy Piper?

Lets image the scenario in reverse- let’s suppose that the NFL donated millions of dollars to Mr. Nowinski’s Group at BU to study the effects of activity in the squared circle on the brains of former WWE wrestlers (this would actually make sense as Nowinski is a former WWE wrestler who says he retired in part due to head trauma sustained in WWE matches). Later after donating millions, the number two executive at the NFL, say Tod Leiweke was given a board seat on this foundation and the foundation did not study the brains of any professional football players. Further suppose the NFL financed a study of 100 former WWE wrestlers brains and they overwhelming showed CTE. At the same time the NFL denied that it knew anything about CTE in NFL players (and did not educate them, warn them or help them about CTE.). While the NFL did nothing about CTE, the WWE donated tens of millions earmarked to study the brains of WWE wrestlers, and WWE put aside one billion dollars to help them. Mr. Nowinski then showed up at Wrestlemania to protest the “inaction” by WWE, but was given comped Superbowl tickets and made no mention of CTE while in attendance at NFL games. Would it be plausible that the NFL did not influence CTE research in any way?

What types of relief do wrestlers want? This is a very basic summary. Ideas for resolving the case include:

1.     Full Health insurance coverage for all Plaintiffs and their families who do not have it or cannot afford it/supplemental polices for people on medicare/medicaid;

2.     Lump sum disability and/or disability payouts based on medical diagnosis- in part based on total number of WWE/ECW/WCW matches/offset by SSDI/SSI;

3.     WWE should pay for Medical monitoring for CTE for all Plaintiffs;

5.     WWE should Pay for comprehensive Mortality/Death Rate in Wrestling Study with view to helping lower it;

6.     Program to build and improve outreach to wrestlers in need (expand drug and alcohol program and tie it to overall medical care);

7.     Fair royalty payments and a full accounting to all plaintiffs;

9.     WWE should Finance wrestler-specific CTE research (unlike just giving millions to other sports/military CTE studies); and

10.   WWE should give lump sum payments to Plaintiffs with CTE diagnoses after death.

Minute Entry for proceedings held before Judge Thomas P. Smith: Settlement Conference held on 8/28/2017. Case did not settle. Magistrate Judge has invited both sides to contact him anytime in the future if they believe settlement would be possible. Total Time: 5 hours.

Settlement Conference set for 8/28/2017 at 10:00 AM and, if necessary, 8/29/2017 450 Main St., Hartford, CT before Judge Thomas P. Smith. Ex parte statements no longer than 3 pages in length, setting forth what discussions they have had with regard to settlement; what demand(s) and counter offers there have been; and views on how to resolve the case are due by 8/23/2017 and shall be submitted via fax. Ex parte statements should address settlement, not a recitation of the history of the litigation. Counsel in attendance must be empowered with decision-making authority.