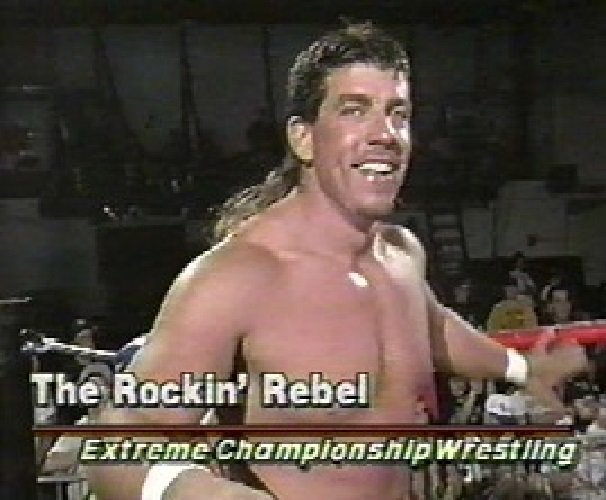 Chuck Williams AKA Rockin’ Rebel, a former WWF, ECW, WCW wrestler who tragically shot and killed his wife before killing himself in a murder suicide apparently had legal disputes with the WWE in the years before his death. We have collected the brief exchange between Mr. Williams and WWE lawyers who corresponded with him. The dispute appears to center on Mr. Williams trade/service mark of his ring name “Rockin’ Rebel,” with Mr. Williams contending that the WWE was infringing it by rebroadcasting his old ECW matches presumably on the WWE network.

Mr. Williams as reported earlier on this blog died in manner strongly suggestive that he may have had CTE. And fortunately his brain has been donated to independent CTE researchers unaffiliated with Chris Nowinski, BU or WWE whose conflicts have come under scrutiny. Chris Benoit who died in similar circumstances was also studied for CTE and found to have the disease which the experts concluded was linked to his violent behavior. No other media outlet has reported his brain donation for CTE. Nor has WWE, Boston University Doctors or Chris Nowinski commented or publicly noted and made the obvious parallels to Mr. Williams and his wife’s tragic death to CTE and the earlier Benoit murder suicide despite the fact of his impending brain study and obvious similarities to the terrible events. If CTE can trigger people to harm their families and themselves is this not an important public health issue that WWE should be out in front especially with the millions of dollars WWE are giving to Chris Nowinski to study CTE in NFL football players? WWE has decided to ignore this health crisis and instead focused on making the issue about the lawyers such as Mr. Kyros who are coordinating wrestlers brains for CTE research and who seeking the Courts help to get medical monitoring, care and treatment specifically directed to WWE wrestlers.

Click here to read some of the emails between the late Mr. Williams regarding his intellectual property dispute with the friendly WWE lawyers who are always seemingly looking out for wrestlers rights.