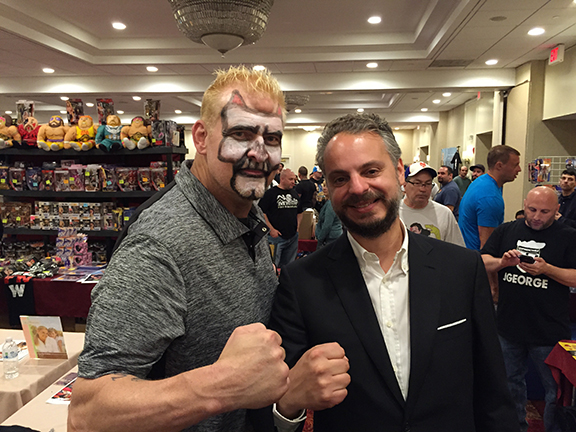 Heart of a Warrior: Read Jon Heidenreich’s Plea to Judge

On September 29, 2017- almost a year ago the Connecticut Federal Court overseeing the wrestlers claims ordered Mr. Kyros and the lawyers representing the wrestlers to get an affidavit from each, writing:” The Court assumes that Attorney Kyros had a good faith belief that the allegations in the Laurinaitis complaint … were true based on interviews with his clients, in which each revealed information about his or her relationship with WWE. Counsel should therefore have no difficulty producing these affidavits within 35 days.” If we did not produce the affidavits the court would dismiss the claims and award sanctions.

Despite the undertone of derision towards Mr. Kyros, and an almost impossible deadline- try getting 60 affidavits from anyone in 35 days never mind from 60 professional wrestlers! BUT finally a chance to talk directly and explain to the Judge that the allegations were real, made in good faith and very important to understand the factual basis of each of the wrestlers legal claims.

The wrestlers all came through and we were able to get all of the affidavits and file them with the Court by near-impossible to meet 35 day deadline! We worked together round the clock all October to get it done!

But last week the court on September 17, 2018 ruled against the wrestlers anyway with little to no mention of the affidavits other than reciting the order to deliver them and confirming that they were submitted.

On page 36 of last week’s order dismissing the lawsuit the court writes: “In addition to these irrelevant allegations*  are numerous others, including a list of physical injuries that have nothing to do with concussions or head trauma, incurred by several Plaintiffs in the ring. [See SAC Paragraph 37 alleging that “Plaintiff Jon Heidenreich sustained serious shoulder injuries requiring multiple surgeries” and that ; Plaintiff Marty Jannetty sustained a severe broken ankle”]

* The other irrelevant allegations the court lists includes: “WWE is a monopoly that earns $500 million annually” “general observations from… a wrestler who is not a party to this lawsuit” [This is Jessie Ventura, you know the former Governor of Minnesota saying such irrelevancies as “Wrestling operated under some of the most unfair working conditions in the country. I don’t know how they got away with it for so many years”  Can anyone reading imagine how they got away with it?] and “WWE does not provide wrestlers with health insurance” Which the court referred to as a non-exhaustive list.

Below is the actual passage from the wrestlers lawsuit, the court calls “irrelevant allegations” and calls “a list of physical injuries that have nothing to do with concussions or head trauma,” As the astute reader will observe the lawsuit drafters appear to have found some examples to illustrate that the plaintiff wrestlers sustained some rather serious injuries some just possibly related to the head while wrestling.

According to an introductory section summarizing the claims at the beginning of the Wrestlers Lawsuit: “Other plaintiffs have documented serious injuries to their head, back, neck and shoulders from their WWE wrestling careers. These permanent injuries are strongly suggestive of past traumatic head injuries and evidence the WWE’s actual past and ongoing notice and awareness of the risk of long-term neurological issues.

II. Plaintiff Bryan Emmett Clark has had neck and back disc replacements and repair surgeries from injuries sustained in WWE matches;

VI. Plaintiff Earl Hebner experienced brain bleeding shortly after being struck in the head with a metal suitcase refereeing a WWE match;

X. Plaintiff Shane Douglas sustained a fracture in his spine in a WWE event;

These look like irrelevant allegations? “that have nothing to do with concussions or head trauma”!? As the Plaintiffs state these allegations are not irrelevant but go to the heart of the factual dispute in the case- namely what knowledge did WWE have about the long term health risks the plaintiffs would face as well as the more obvious fact that they ran an unsafe, unregulated workplace with no OSHA oversight in violation of labor laws by not providing workers compensation and so forth. Keep walking nothing to see here…

Btw we will have More on the inclusion of Marty’s ankle in another post.